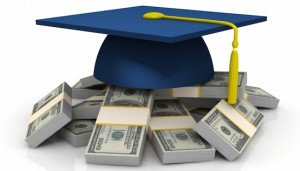 Last Thursday, Detroit gained the dubious distinction of becoming the largest municipality in American history to declare bankruptcy. In the days since, various partisan sources have weighed in on the story of a bankrupt major American city. Over at Slate, Matt Yglesias argues that municipal bankruptcy should be easier and more common, to provide cities and townships with the tools required to shed the odious burden of crippling debt often caused by long-departed, ineffectual politicians:

[…]a city is more like a company in the sense that the managers who created the problems are usually gone by the time the reckoning comes. And even the best managers can’t turn a city around unless they can direct a much larger share of the city’s revenue to current services rather than paying off old debts.

While this may be true, it highlights the absurdity of our current student debt crisis: practically all forms of debt (including gambling debt and credit card debt) can be forgiven through bankruptcy… but not student loans. While deeply dysfunctional multinational corporations can declare bankruptcy at the drop of a hat, and even municipalities as large as Detroit can resort to Chapter 9 protection as a last resort to avoid their creditors, regular Americans with student debt are afforded no such “luxury.”

Before the frantic “Reagan revolution,” filled to the brim as it was with (mostly bipartisan) deregulation, bankruptcy was still possible for discharging student loans. As the supply-side fever of Reagan’s presidency swept through America into the ’90s and the Clinton presidency, the deeply corrupted free market principles of deregulation and numerous blatantly pro-banking laws had washed ashore the massive (and fast-expanding) student loan system, with predictably disastrous consequences.

First, in 1976, Congress instituted a fairly reasonable reform to bankruptcy laws: To prevent unscrupulous students from amassing a number of expensive post-graduate degrees (only to immediately declare bankruptcy and simply wait out the seven years without credit), a five-year delay on bankruptcy protection was implemented for student loan debt. In 1990, that waiting period was extended to seven years. Hypothetically, by forcing students to delay dischargement, they would be given the necessary time to build equity, earn a good credit score, and acquire some wealth, which would in turn provide a key disincentive to the “moral hazard” that immediate bankruptcy might present to younger, less stable graduates.

And yet, for the banks, this wasn’t enough: In 1998, the law was changed again, this time ensuring that federally backed student loans would be made completely and permanently nondischargeable through bankruptcy. But for the banks, even this wasn’t enough: In this system, private loans could still be discharged — albeit after a seven-year waiting period and the self-inflicted destruction of one’s credit and assets. Still, the banks continued the push to deregulate: In 2005, the law was changed a final time, shielding private student debt from bankruptcy just like their federally backed kin. Now, eight years after the law has passed, student loan collectors are some of the most predatory in the industry, and will take your car and your house, garnish your wages, and even go after your parents or other co-signers if you try to avoid repayment. If you’re fortunate enough to grow old in a world that offers the elderly Social Security while subsequently unfortunate enough to carry student loan debt all the way into retirement, predatory collection agencies can even garnish your Social Security check.

Bankruptcy law underwent a number of quick transformations, each systematically undermining the rights of students a little more than the last. These developments would also conspire — intentionally or not — to contribute to the rising costs of college, our ballooning debt levels, and the staggering default rate. That they’re enormously popular among the banks and public-private corporations profiting off these loans’ nondischargeability should surprise exactly no one.

In the shadow of these onerous, misguided policy decisions, we find ourselves facing a student loan burden so enormous that its present value has actually eclipsed our national credit card debt. Incredibly, the fundamental problem is quite simple: Our current system offers no incentives for loan originators to deny risky borrowers; consequently, student loans are much too easy to obtain. Huge amounts of cash are offered to students without regard to the school they might attend or the major they might choose. Colleges and universities happily raise prices (at a rate significantly faster than inflation), secure in the knowledge that larger loans will be provided to cover increasing costs. Faced with a glut of cash, administrator salaries have skyrocketed. Pricey new facilities are built for disgruntled students quite justified in their demands for improved amenities to match quickly rising tuition costs.

High school students are heavily coerced by the adults in their world to attend college by any means necessary, and this coercion is wrapped in the implicit threat of a life of poverty, shame and alienation for those foolish enough not to listen. At a moment when young people are incredibly suggestible, parents, teachers and administrators conspire to feed their children to the scores of predatory lenders more than happy to offer whatever loans these adolescents will sign for the promise of a brighter future. What’s worse, according to an article by Josh Freeman in The Atlantic, as enrollments rise and student become increasingly leveraged with debt, necessary aid packages aren’t keeping up with rising tuition costs:

On average, according to Andrew Gillen of Education Sector, only 60 percent of the increased revenue from a higher sticker price is recycled back to aid.

In practical fact, administrators are raising prices across the board, often justifying these increases by promising more aid to needy students (paradoxically to offset those same rising costs) – only to divert the new funds elsewhere, leaving the most desperate students with higher tuition but scant new financial aid.

All of these problems together contribute to the $1 trillion student debt crisis, and they all can be traced back to the disastrous bankruptcy deregulations of the late ’90s and early 2000s.

Others have noted that bankruptcy has exacerbated the student debt crisis. Time’s Martha C. White notes:

[…]the student-loan market has some quirks that could be contributing to the rising delinquency rate. “Lenders of credit-card debt, auto loans and mortgages have adopted tighter credit-underwriting criteria in the aftermath of the credit crisis. This has denied credit to financially distressed borrowers,” [Mark Kantrowitz] says. Most federal student-loan programs, though, will accept borrowers regardless of their credit history.

A recent report from the D.C. lobbying firm Hamilton Place Strategies titled “The Economics of Student Debt” suggests that we consider preventing loan originators from offering enormous debt packages to students unlikely to find work that will allow them the ability to repay:

Lending institutions largely ignore the difference in default risk between majors since the federal government guarantees the loans. Students and parents can likewise ignore the returns on different degrees and college more broadly, because culturally many see college as a “moral good.”

Offering desperate, impoverished students bankruptcy might seem like a cynical solution, a form of victim-blaming that largely punishes the naive children who took out bad loans. But the consequences would be enormously helpful to society as a whole and shouldn’t be blithely overlooked.

Banks love student loans because they aren’t dischargeable and are consequently extremely stable; in the post-Recession world, safe investment vehicles are relatively uncommon; with interest rates at historic lows and credit for all but the most desirable borrowers still hard to obtain, securitized student loans have become an extremely attractive financial product. The risk of bankruptcy would change this whole calculus: investors would suddenly need to be wary of lending out enormous loans to students highly unlikely to repay. With students unable to take on enormous debt for degrees of questionable value from overpriced schools, they’ll be forced to look to other options. A number of excessively expensive schools would probably be forced to shutter (one estimate suggests half of all universities could close by 2030), but this might be more of a feature than a bug, as fewer students are exploited by college administrators armed with dubious statistics purporting to defend the long-term value of college.

If bankruptcy laws were reformed, there would surely be unintended casualties, as some students would find themselves without easy access to adequate loans or local universities. But the social benefits would far outweigh the challenges faced by a small minority of disenfranchised students, particularly when costs start to drop across the board and tuition growth finally slows to the pace of inflation. Some students may be forced to reconsider their majors, find cheaper schools, or survive solely on private scholarships, Pell grants and paychecks, but the consequences of these sacrifices should end up best serving those same desperate young adults, otherwise coerced into taking deep debt from institutions that routinely obfuscate the value of the degrees they offer, and provide little help to students hoping to find relevant work after they’ve matriculated.

Reforming bankruptcy will not solve the student debt crisis, but it will provide a crucial first step by decoupling our politicians and our educators from the deeply seductive cash flow these predatory loans provide. Student debt (and particularly student debt default) provides an enormous revenue stream to colleges, banks and the federal government by robbing naive young Americans hoping to improve their economic position.

Congress needs to party (legislatively) like it’s 1997, and allow all student loans to be discharged through the same (onerous and punitive) bankruptcy process that other debtors enjoy. In a recent article here on Salon, David Dayen lets Senator Elizabeth Warren explain the problem with our current priorities succinctly:

“Why should students who are trying to finance an education be treated more harshly than someone … who racked up tens of thousands of dollars gambling?”

So, will the law be changed? Unfortunately, recent efforts have proven both unsuccessful and underwhelming. In January, Senator Dick Durbin introduced the “Fairness for Struggling Students Act,” which would make private student loans dischargeable just like any other form of private debt. While clearly insufficient (private loans only account for about 15% of total student debt), this would have at least helped: in the eight years since private loans were shielded from bankruptcy, delinquency rates have doubled. Unsurprisingly, Senator Durbin’s bill has floundered in the Senate, a major red flag even if this piece of legislation enjoyed broad support. (It doesn’t.) When considering the enormously powerful Wall Street banks — which combined to spend over $100 million lobbying Congress in just the first eight months of 2011 — this paints a portrait of a bill destined to die a quiet legislative death.

You want to fix our loan crisis? Provide struggling former students with the same protections afforded to Detroit: the promise that when all else fails, we’ll be thrown the vital life-preserver of bankruptcy, a last-ditch salvation from the turbulent waters of crushing, overwhelming debt. Until these wildly misplaced priorities are corrected, our mounting student debt crisis will only worsen.

Written by Tom Donovan and published on the National Association of Consumer Bankruptcy Attorneys.
Tim Donovan is a freelance author who blogs about Millennial issues at The Suffolk Resolves.