Surprises in Your Car 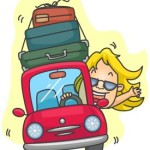 It’s officially road trip season and it’s common to allow your friend or significant other to take the wheel for a while so you can have a break from driving. Unfortunately for one Missouri driver, after being pulled over, one man was arrested for not only driving on a suspended license but also for the meth found in a subsequent search of his girlfriend’s car. Luckily, the Missouri courts determined that a person who drives a vehicle with the owner’s permission has the same expectation of privacy when it comes to a search and seizure as the actual owner of the vehicle. The evidence was excluded from court due to lack of reasonable suspicion, but it’s always best to make sure there are no dead bodies hiding out in the trunk of your friends car the next time you grab the wheel. If you have recently been arrested or are dealing with a drug charge, contact our office at 816-524-4949 or check out our website at Hoorfarlaw.com.

This entry was posted in General and tagged Attorney, Down Town Lees Summit, Law Office of Camron Hoorfar, Lawyer, LOCH, Road Trip, traffic, We Can Help. Bookmark the permalink.